News
Award for the most remarkable exhibition of 2019, AICA Belgium Award 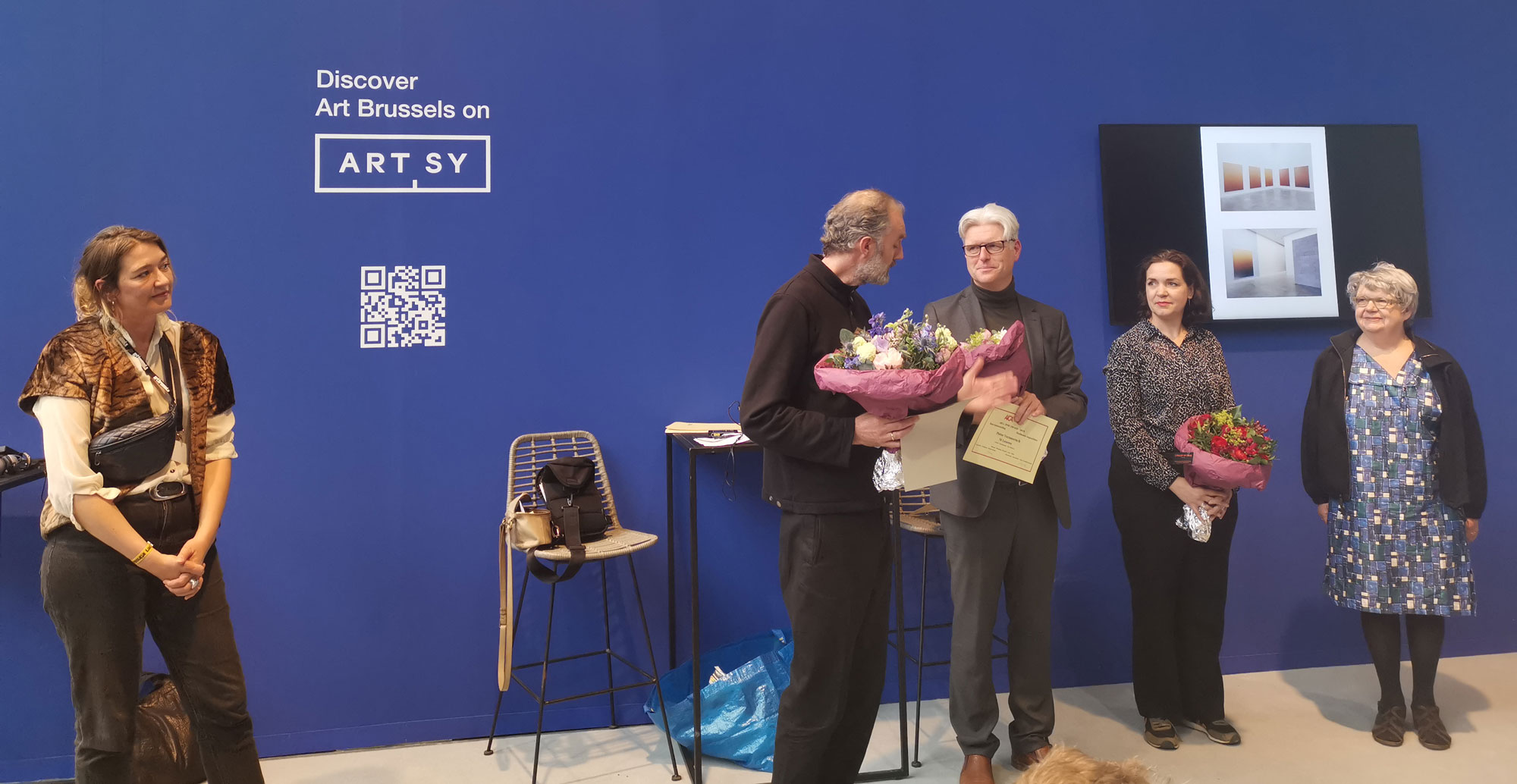 Pieter Vermeersch's solo exhibition, organised by M Leuven with curator Eva Wittocx, was chosen by the 112 members of the Belgian Association of Art Critics as the most remarkable exhibition of the year 2019.

The prize also includes the monograph Variations, published on the occasion of the exhibition, edited by Moritz Kung and published by Ludion. The Prize was officially awarded in the Art Lounge of Art Brussels on 30 April. The Laudatio was conducted by Maud Salembier (coming soon online here). On behalf of the Board of Directors and our members, we would like to warmly congratulate the Museum M Leuven and its entire team!

Since 2016, this prize has again been awarded annually to an exhibition that has made a significant contribution to the current debate on art. In previous editions, the AICA Belgium Award went to:

Support for the Ukrainian people

AICA Belgium (ABCA/BVKC) joins the International Bureau and the many National Sections in protesting against the invasion of Ukraine by Russian troops. It aligns itself with UNESCO's protest against this war.

Any war is a crime against the essence of the human being: its corps, its culture, the traces of its past.

AICA Belgium expresses its support for the Ukrainian people and the Russian peace demonstrators.

For its 11th edition of 'Watch this Space', the 50° nord network contacted AICA France and AICA Belgium (ABCA/BVKC) to ask their members to write a critical text on each participating artist.

The digital edition containing all these texts can be consulted via this link: https://we.tl/t-t2qVINyRTm

Congratulations to Laurent Courtens for this Award!!! 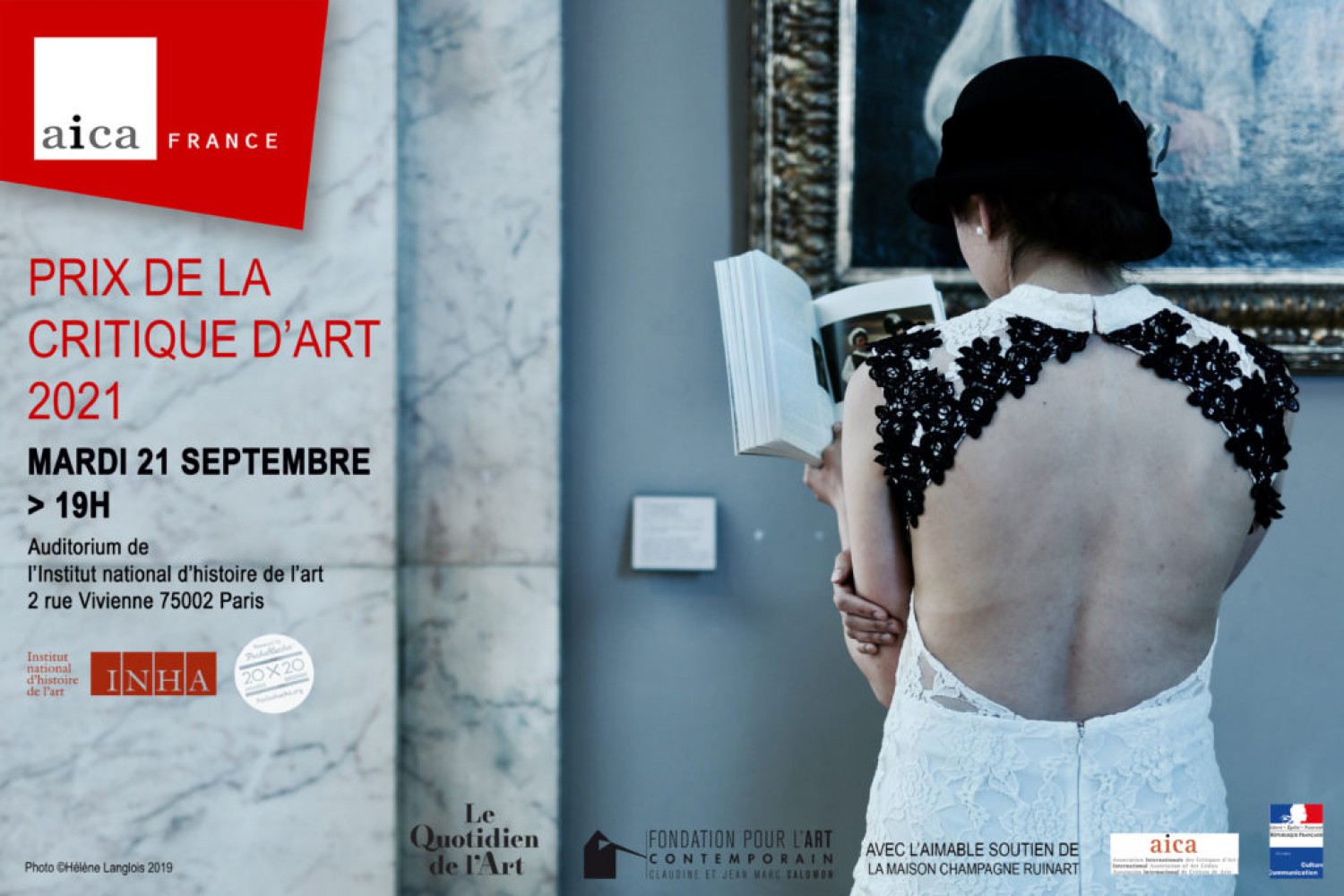 On Tuesday September 21, the 9th edition of the AICA France Art Critics' Award was held at the INHA auditorium. The winners of this original Award inspired by PechaKucha are : 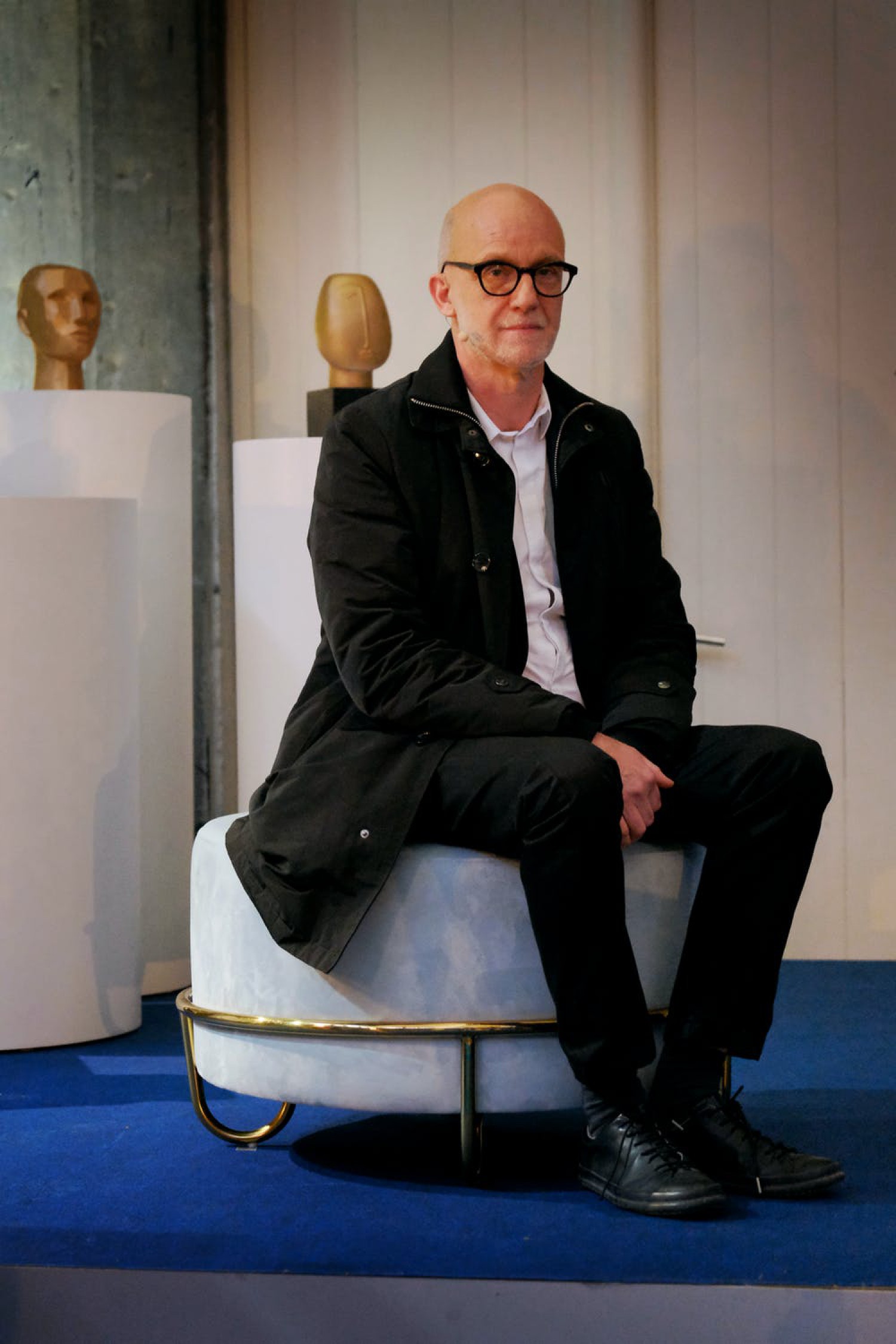 On 18 May, the Flemish Community awarded the Ultimas 2020 to twelve laureates, in recognition of their exceptional merits in the socio-cultural sector.

From the jury report:

Last year there was quite a commotion when Luk Lambrecht was fired after more than twenty years of service as curator at CC Strombeek, a place that through his efforts has grown into an established name in the Flemish cultural landscape. The fact that Lambrecht is receiving an Ultima at this very moment therefore seems a well-considered choice.

Between 1945 and 1985, many major Belgian writers devoted themselves to 'creative art criticism', a variant of journalistic literary art criticism. They were part of a tradition ranging from Charles Baudelaire to Yves Bonnefoy, via Oscar Wilde and Rainer Maria Rilke. Belgian writers - Hugo Claus, Christian Dotremont and many others - deliberately distanced themselves from 'objective' criticism. They produced lyrical and narrative texts that in some cases were creatively connected to the art they were writing about. As they were closely linked to visual artists or active in the visual arts themselves, their art criticism appeared not only in newspapers and magazines but also in monographs, catalogues and exhibition brochures. These publication media allowed them to break away from the demands of journalism.

By examining the cases of several Belgian art critics, both French and Dutch speaking, this symposium aims to provide a comprehensive picture of artistic life after 1945, when neo-avant-garde art pushed art critics to literary experimentation. Among the writers and critics under discussion are Louis Paul Boon, Marcel Broodthaers, Hugo Claus, Christian Dotremont and Jean Dypréau.

The symposium will conclude with a tribute to the poet-critic Roland Jooris on the occasion of his 85th birthday.

Organised by SEL/Bozar with the support of the research group Centre for Literary and Intermedial Crossings (CLIC/VUB). 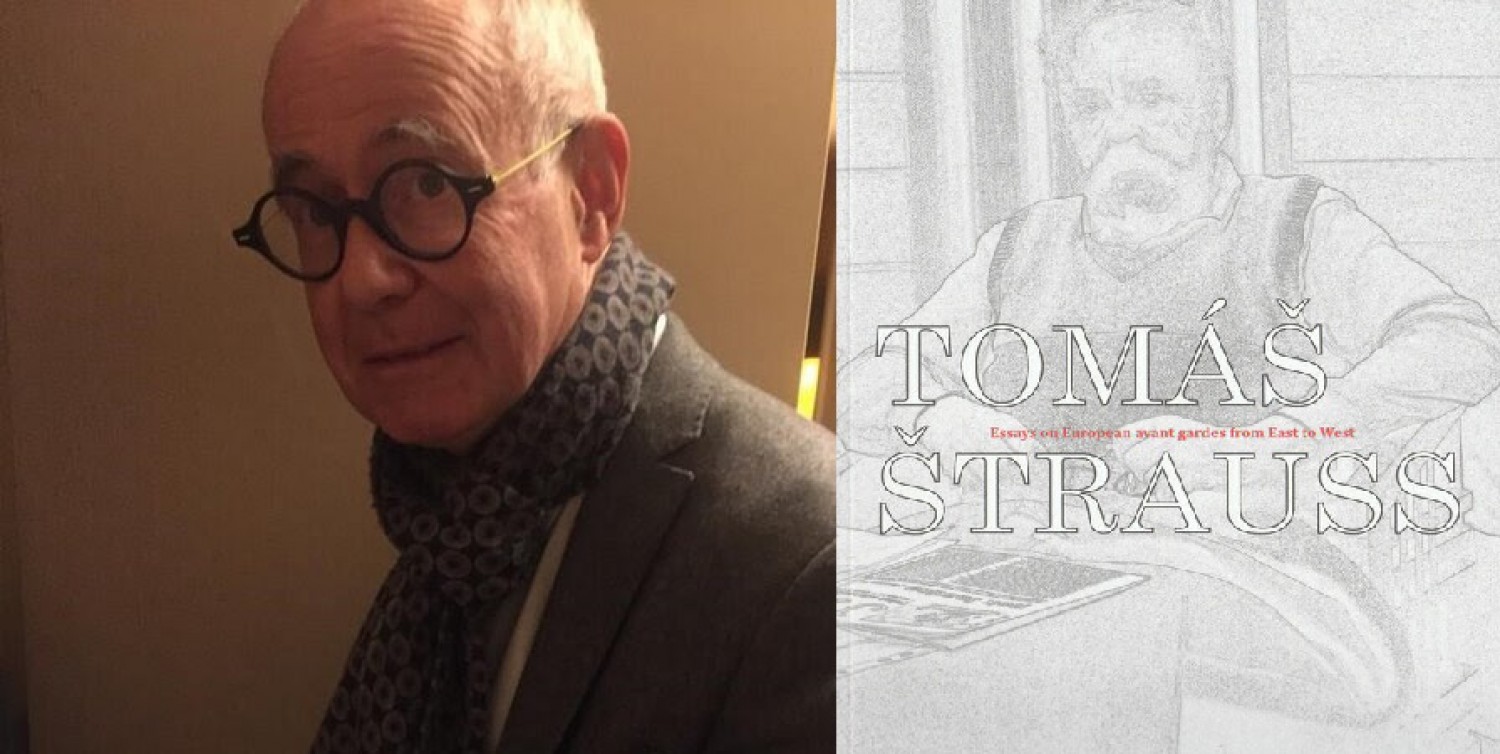 A Collection of critical books in a series of other publishing experiences — From document to book, from artist to critic

During this conversation, Jean-Marc Poinsot, founder and director of the Archives de la Critique d'Art de Rennes since 1989, will talk about the publications he produced within the framework of the AICA’s editorial project 'Art Critics of the World', as well as the ideas and choices that gave rise to them.

Jean-Marc Poinsot is professor emeritus of History of Contemporary Art at the University of Rennes 2. He has published and edited books and reviews including the review Critique d'art (1993). He has contributed to the Paris Biennale (1971), to the CAPC, Museum of Contemporary Art of Bordeaux, as well as to the Institute of Contemporary Art of Villeurbanne (1999). Likewise, he took part in the initiative of the creation of institutions dedicated to contemporary art such as the FRAC Bretagne (1980) and the Archives de la critique d’art (1989). Furthermore, he also created a Master Métiers de l'exposition (1984). A Member of AICA since 1974, he has been in charge of the Art Critics of the World collection since 2012.

To receive the Zoom link, please register by February 8th at the latest at the following address: aicainternational.webinar@gmail.com

WEBINAR - DISCUSSION ON "LIVING IN THE EXHIBITION. THE ARTIST AND THE SCENOGRAPHY " WITH: MATHILDE ROMAN, CHANTAL PONTBRIAND, ALEXANDRA BAUDELOT 18 JANUARY 2021 AT 6PM 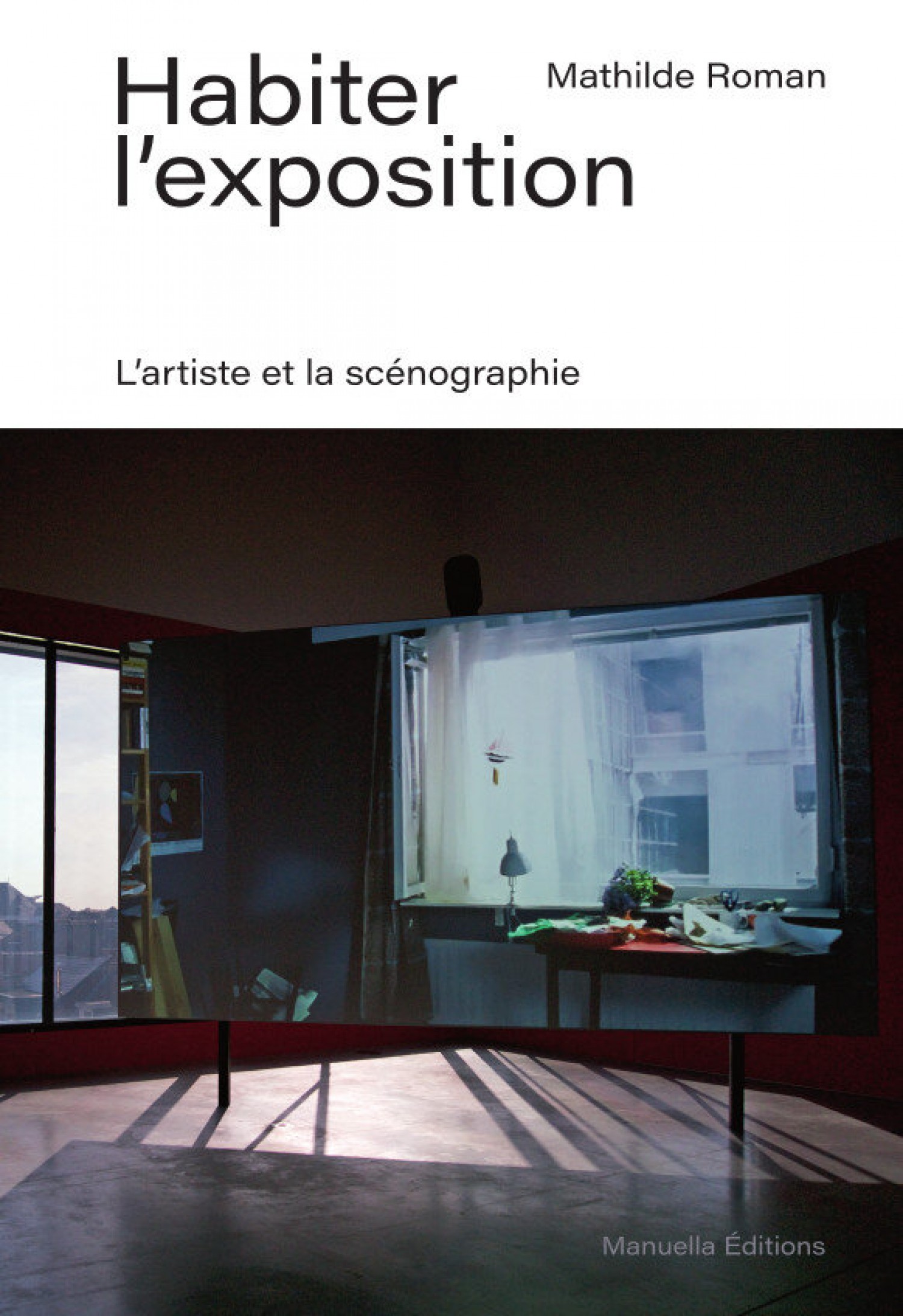 On the occasion of the publication of Mathilde Roman's book "Habiter l'exposition. L'artiste et la scénographie", with a preface by Chantal Pontbriand, President of AICA Canada, this webminar will initiate a discussion in French between the two authors, in a dialogue led by Alexandra Baudelot. The discussion will return to the ways in which contemporary artistic practices increasingly view the exhibition as a dynamic format, as a relationship between works, bodies and spaces, as an inhabited, living environment that welcomes a diversity of sensibilities. While scenography has long been kept out of the field of art, it is now being re-evaluated and intimately associated with the conception of exhibitions, through dialogues with scenographers but also through the integration of its codes, tools and history into the artist's practice.

Mathilde Roman is a Doctor of Arts, art critic, and has been treasurer of AICA International since 2016. She has been a professor at the Bosio Pavilion, Art&Scenography, Monaco since 2006, and regularly leads exhibition projects. At the end of 2020 she published Habiter l'exposition. L'artiste et la scénographie, published by Manuella.

Chantal Pontbriand is President of AICA Canada, curator of exhibitions and events, museologist, and writer. She has curated numerous events, festivals, exhibitions, publishing projects, magazines and more than twenty-two books, including the contemporary art magazine PARACHUTE and the FIND (Festival international de nouvelle danse). Her work explores issues of globalization and artistic heterogeneity.

Alexandra Baudelot is a curator and art critic living in Paris. In 2009 she founded the contemporary creation platform and independent art centre ROSASCAPE and co-directed the Laboratoires d'Aubervilliers from 2013 to 2019. She is the author of numerous articles on visual arts, dance and performance, and has published several books in the field of contemporary art.

More information on the publication HERE

Award of the most remarkable exhibition 2019 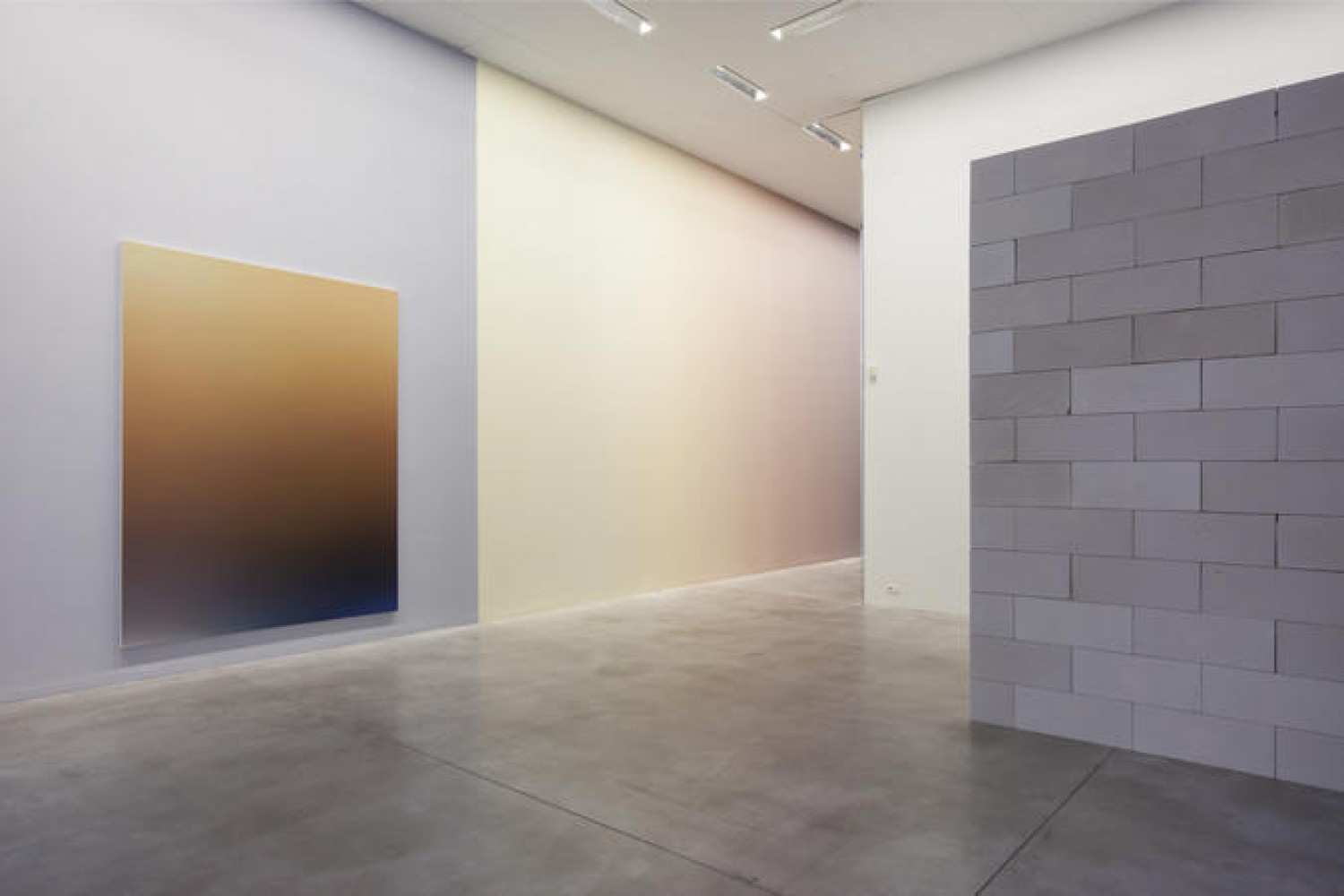 AICA Belgium (ABCA/BVKC), is proud to present this year’s annual AWARD for BEST EXHIBITION 2019 to the solo exhibition of Pieter Vermeersch at M Leuven.

We congratulate the artist, the curator, the authors and the M Leuven team for their initiative and successful joined venture.

Since 2016, each year, the Belgian Association of Art Critics has awarded its honorary prize to the best exhibition of the previous year, thus aiming to underline the value of an exhibition contributing to the discourse of contemporary art.

It was very much our intention to present this Award in the presence of the artist on 3 December 2020 in M Leuven (Louvain). As a result of the various COVID-19 measures that have been officially imposed in our country, we are obliged, in consultation with the Museum, to postpone this award ceremony to a later date. Together with you, we hope that spring 2021 will remain an achievable date. (More details in further communication).

Award of the most remarkable exhibition of 2018, presented by AICA Belgium 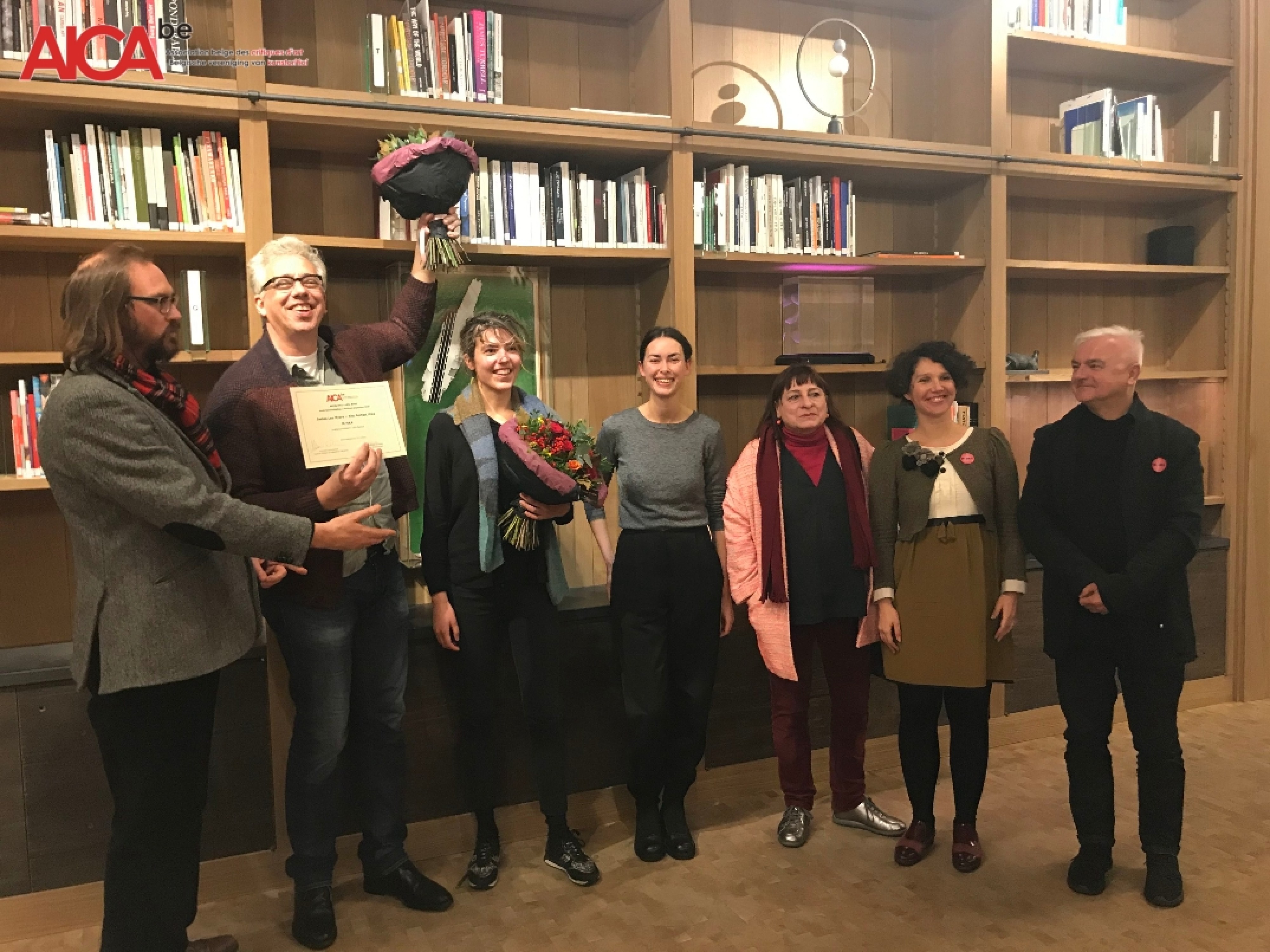 The James Lee Byars - The Perfect Kiss exhibition, organised by M HKA, under the curatorship of Lotte Beckwé, was elected the most outstanding exhibition of the previous year by the 111 members of the Belgian Association of Art Critics.

On behalf of the Board of Directors and our members, we would like to warmly congratulate M HKA and its entire team!

The AICA Belgium Award is granted annually to an exhibition that has made a significant contribution to the current debate on art. The previous exhibitions that have been honoured are: "Lili Dujourie. Folds in Time - Plooien in de tijd", S.M.A.K., Ghent and Mu.ZEE, Ostend (2015); Mira Sanders, "Inland Voyages in an Inland Voyage" in ARGOS, Brussels (2016) and " The Absent Museum. Blueprint for a museum of contemporary art for the capital of Europe " at WIELS, Brussels (2017). 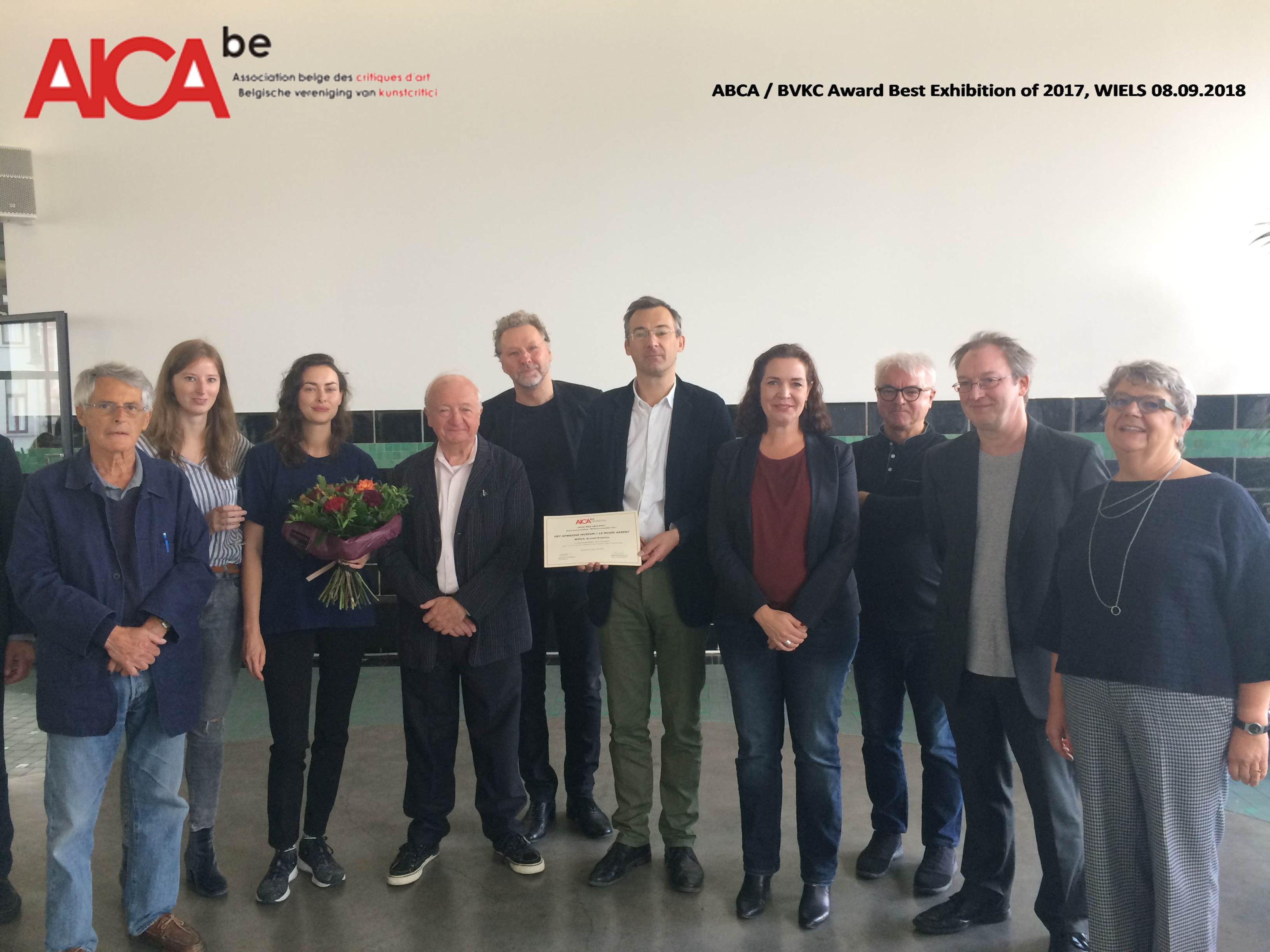